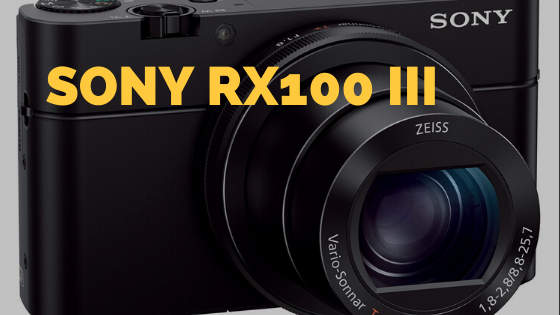 The Sony RX100 III is the latest during a range of systematically fantastic Sony compact cameras. Sony’s RX100 models have tested that compacts aren’t only for people that are enthusiastic about convenience or don’t care abundant on the far side phone-camera quality.

Once again, the Sony RX 100 III offers a seriously compelling camera for people who need quality pictures however can’t, or don’t want to, deal with the size of a DSLR or compact system camera.

This is a fine-tuning of the Sony RX 100 II and one that doesn’t come cheap at $748.00. However, until we see whether the Panasonic LX100 can steal its crown, it offers some of the best images you can get from a zoom-lens compact.

The Sony RX100 III can look terribly acquainted with people who already understand Sony’s previous RX100 cameras. If you’re new to them, they offer something very special indeed.

Despite trying sort of a fairly small compact – the type you’ll be able to slot in your pocket if need be– the Sony RX100 III features a 1-inch sensor. The Nikon J4 CSC uses the same size of the sensor, and it’s much larger than the kind we associate with compact cameras.

The huge popularity of the previous RX100 cameras has normalized it a little, but we’re only now starting to see some real competitors.

The Canon G7 X and Panasonic LX100 are on the way, but Sony’s RX100-series cameras started the ball rolling. The Sony RX100 III is a tiny bit deeper than its predecessor thanks to its new lens, which sticks out a little more, but this is still an eminently portable camera. It’s also very well made. A metal body and dense feel give it the hardiness we expect from a camera this expensive.

Previous RX100 models were criticized for being a bit too ‘point and shoot’ for enthusiasts who might be attracted by the mix of image quality and portability, and Sony has tried to deal with this within the Sony RX100 III.

First, there’s a new control ring that sits around the lens. This can be customized to control the focus, aperture, shutter speed, and other functions. Those who wish additional manual control don’t continuously get to work their approach through the menu system with the Sony RX100 III.

The Sony RX100 III’s control dial matches up absolutely with the opposite major amendment during this model: Sony has additional AN EVF. It pops out of the left edge of the top plate, where you might expect a pop-up flash to sit.

Using the control ring and EVF together gives you the feel of a higher-end CSC or DSLR, which is rare in compact cameras. Of course, it’s on a much smaller scale here.

We did find that, as everything is so crammed in, you do often end up squishing your nose against the display when concentrating on using the EVF to compose a shot. This could be helped by using a slide-on eye rest but – based on our searching – one doesn’t exist. Not yet, anyway.

And the idea of using an EVF on a camera this small does take a bit of getting used to. We started off virtually ignoring the EVF, simply because we’re so accustomed to composing with the rear display on a camera of the RX100 III’s size.

However, it is worth investigating. It’s an OLED display and offers a 1.44 million-dot resolution, trumping the other EVFs we’ve seen in small cameras. For example, the Panasonic LF1‘s EVF only offers 200,000 dots, which we found too low to be enjoyable to use.

It’s perfect to step in when very bright sunlight washes out the rear display, or in low light, when it makes composing a photo feel more direct. We don’t think that many Sony RX100 III buyers will use the EVF all the time – more like 50 percent – but it pairs well with the control ring and slides back into the body when not in use.

A sacrifice has been created to suit AN EVF within the Sony RX100 III, though. The flash has been moved to the middle of the top plate, and the hot shoe from the RX100 II has been dumped. This means you can’t attach a flash or an external microphone for audio capture with video.

It’s a shame, but having used the camera for a good while, we think it’s a fair compromise. And if you must have a hot shoe, the Sony RX100 II is still available, and still an excellent camera.

It’s bright and offers both good contrast and good color. While the EVF is useful in some conditions, the rear display is more than up to the task most of the time.

The Sony RX100 III screen has been improved in a method, too. Last year’s Mk2 model only tilted to aid shooting above and below head height, but this new one flips all the way around. These 180-degree tilt screens are largely there for selfie lovers, letting you see yourself as you’re capturing the shot.

We’re not sure this fits in entirely with the sort of person who might spend $598 on a camera, but it’s handy for low-height shooting, too. The Sony RX100 III screen remains decisively non-touch, though. Touch focusing was one of the few things we missed when shooting with the camera, and it would be a good fit for the sort of fast-and-loose shooting that suits the pocketable frame.

While you lose some of that zoom range, the RX100 III’s lens is a good deal faster when zoomed in, which may have something to do with the performance improvement we noticed. It’ll also help you when shooting with the zoom-in lower lighting and gives you more creative control over the depth of field.

It’s a good lens, shaking off some of the optical compromises that still lingered around the RX100 II. However, focusing performance is nice instead of stellar, despite the lens quality. Focusing is quick, but not lightning-fast – keeping it in the same sort of performance bracket as the previous RX100 cameras. It does have an improved processor, though. The Sony RX100 III uses a constant Bionz X processor found within the Sony A7 and Sony A7R.

This offers a substantial boost in a burst-mode shooting. The Sony RX100 III will shoot at up to 10fps, up from 7fps in the previous model. There is a definite speed increase, but it doesn’t seem to translate into faster AF performance, where we usually notice it most.

It does offer object tracking and face detection, and we found that using the former was a good way to compensate for the lack of touch focusing. Just center-focus on the subject, then turn the camera to get the photo as you want it to avoid having to fiddle around with area AF.

The Sony RX100 III is a reliable shooter. The standard metering mode produces generally well-exposed shots and exposure-compensation settings are easy to alter. As detailed earlier, you can set the lens control ring to tweak exposure if it’s not busy controlling another parameter, or fiddle with it using the menu system. There are also center-weighted and spot-metering modes if you want to give more bias to a particular point of the scene.

While you naturally need to keep an eye on metering, the results are also helped out by the Sony RX100 III’s fantastic dynamic range. At low ISO settings, it even rivals some DSLRs. We got the performance of up to 12.42EV, a good 2-3EV is better than we often get from compact cameras. This goes a decent way to explaining why the Sony RX100 III’s photos are thus special.

Photo quality is simply superb among compacts, and to get better you’d either have to embrace a fixed focal length, with an APS-C compact such as the Ricoh GR or Nikon Coolpix A or accept a much larger body. Even those prime-lens compacts are a chunk larger.

The detail is good, too. While at base ISO the 20.1-megapixel sensor provides what we’d expect from such a resolution, the RX100 III holds onto its detail very well further up the ISO scale by compact standards.

There’s a commendably minor variation in detail captured throughout ISO 80-800, giving you a good degree of lower-light flexibility without a huge compromise in image quality. The detail and dynamic range take more of a dive at ISO 1600 and onwards, with the outer reaches of the ISO 12800 native range starting to look quite scrappy. However, performance remains compelling, if not an upgrade to what we saw last year in the RX100 II.

The two cameras have the same sensor, so that’s no surprise. Still, it’s only people who have experience of previous RX100 cameras that would complain about this. To newcomers, getting this sort of quality and flexibility from a camera this small is an eye-opener.

It also adds a neutral-density filter, which limits the amount of light that gets through to the sensor. This lets you use wider apertures on bright days without ending up with overexposed shots.

Video is improved, too, although the Sony RX100 III doesn’t offer 4K video shooting. Instead, it continues to top out at 1080p but offers the XAVC S format, which boosts capture bitrate to 50Mbps. Of course, this may not compensate for the lack of hot shoe, meaning you can’t attach an external mic.

Like the different RX100 cameras before it, the Sony RX100 III is a fantastic compact camera – one of the perfect. It makes some worthwhile upgrades, too. Thanks to the quicker lens, the zoom range is additionally helpful in trickier lighting, and also the EVF is genuinely sensible – a true accomplishment has given however small this camera is.

However, Sony’s had to make some sacrifices to get there. The lack of hot shoe limits the camera’s video capabilities, not to mention wiping out being able to add a larger flash. We can live with these compromises, but make sure you can, too.

It’s also not a cheap solution, so make sure you’ll appreciate the smaller size or you’d be better of buying a decent CSC with a great lens for this sort of money.

Check the Current Price on Amazon

The Sony RX100 III is another compact camera smash – a small package that can create some gorgeous pictures. I have found it one of the perfect pocket camera. You can pick it in your travel equipment list.